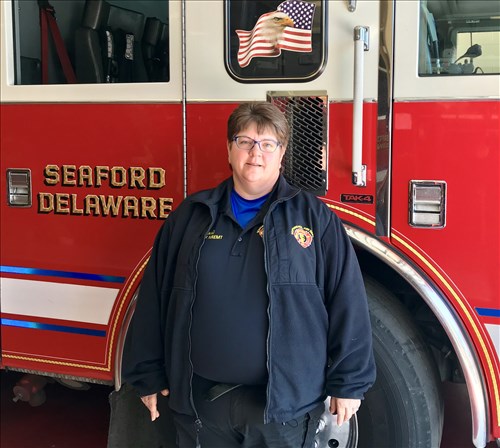 Vikki Mast started her career as an Ambulance attendant with Slaughter Beach Fire Company in 1993.  She bridged from Ambulance attendant to NREMT in1996. In March of 1997, Vikki returned to her home town of Bridgeville and joined the Bridgeville Vol. Fire Company as a NREMT.
Vikki has served the Bridgeville Vol. Fire Company for the past 20 years. She has held the positions of EMS Lieutenant and EMS captian, and was name EMT of the Year with Bridgeville in 2005.  Her certifications include, NREMT, FTO, Basic Fire Fighting, Structural Fire Fighting, Vehicle Rescue and Hazmat Response Skills.
Vikki joined the fulltime career staff at the Seaford Volunteer Fire Department in November of 2008. On April 7, 2018 Vikki received the Cliff Lee Award for 2017 after being nominated by her peers here at the Seaford Volunteer Fire Department.